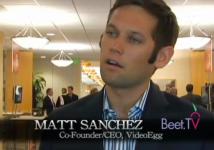 VideoEgg, the online video technology and marketing company, will acquire the giant blog software company Six Apart in a deal to be announced tomorrow. The new company will be called SAY Media.

Both companies released a news about the deal late today, but did not reveal terms. Here’s the report by Brian Morrissey at Adweek.

Here’s an interview we did with CEO and co-founder Matt Sanchez back in 2008.

In recent years, Six Apart has been putting considerabl effort around monetizing content for bloggers. We caught up with the company’s CEO Chris Alden last year for this update on the company. Alden will not be joining the new company after the merger. His interview is below.