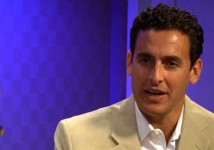 In its rankings for video views in August for the U.S., comScore has found that the San Francisco-based video ad network Brightroll has served up nearly 470 million video ads, ranking second to Hulu for most ads served.

A big development in the new numbers is the acendency of Facebook which has replaced Yahoo! as the number two video site, as Leena Rao of TechCrunch writes.

In August, we spoke with Brightroll CEO Tod Sacerdoti for an update on the online video business.  We have republished the clip today.