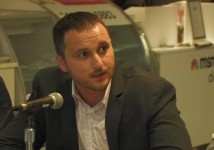 5MIN, the fast growing syndicator of online video, mostly lifestyle and "how to" clips, has been sold to AOL, according to a report by Peter Kafka of All Things Digital, MediaMemo.

Peter says the deal will be announced this morning.

In June, CEO Ran Harnevo participated in the Beet.TV Online Video Roundtable.  We have republished a segment of Ran speaking about the imperative of syndication strategy for content producers.  The second clip is a one-on-one interview with him.

The June roundtable was co-moderated by myself and Peter Kafka.

Update:  AOL has confirmed the deal.