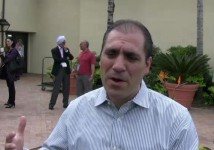 Tremor Media, the New York-based video ad network, had 450 million video ad views in July, according to the comScore report.

comScore puts Tremor second to Hulu in most ads served.   This is the second month when comScore has broken video views into two categories:  videos ads and video content served.

We caught up with Tremor Media CEO Jason Glickman at the All Things Digital conference in June.  He says his company has achieve the scale of major cable network.

He says that internal figures put the monthly number of ads served as over one billion.

We have republished the interview today.