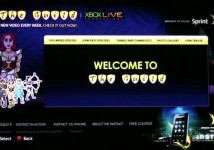 Microsoft's Xbox LIVE has some 23 million subscribers with two million watching concurrently.  With such a big, engaged audience, Microsoft has created a hybrid media environment for advertisers seeking to reach 18-34 year-old males.

Company executives say the fast growing service has reached a sort of critical mass, on par with a major cable network, and is charging advertisers rates on the level with television, considerably higher than for online media.

We spoke recently with Mark Kroese who heads up advertising for entertainment and devices at Microsoft.  He explains, and we demo, the various advertising opportunities on the "network," including in-game product placements, micro-sites, and video ads.

Kroese claims that Xbox LIVE is the "largest" social network around a media property.

Beyond games, the platform has expanded with a wide range of entertainment offerings, and the offering will continue to expand, he says.

About two thirds of Xbox owners opt to subscribe to the live service, which has an annual fee of $50.

The service is offered in 26 countries.