Covering the Street Protests in Tehran: How Reuters Curates UGC via Twitter 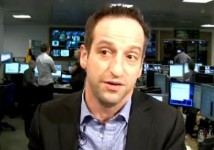 LONDON — In Iran, with significant limits on what it can cover from its bureau in Tehran, Reuters is following a cadre of citizen journalists on Twitter who provide camera-phone videos of street protests, says Greg Beitchman, Global Editor of the Reuters News Agency.

From London, Beitchman manages the vast global television news gathering and distribution service that provides video news packages and raw footage to many of the world's broadcasters and an increasing number of online publishers.

I sat down with him on Friday at the Reuters offices on London's Canary Wharf for a chat about news gathering in trouble spots including Iran.

He explains that Reuters editors follow individuals in Iran who Tweet about about videos and send links to sites where the videos are hosted.

Beitchman was a panelist at our online video summit on Monday at the Guardian's offices.  Here is a report on his comments published by Journalism.co.uk