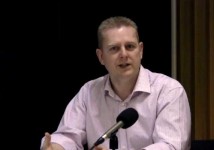 LONDON–While Adobe Flash is the most pervasive plug-in for video on the web, it is not supported by Apple's iPhone, iPad, and related devices.

Publishers wanting to get videos on these devices are scrambling for for various solutions including the nascent HTML5, an emerging technology to publish video on the web without using a plug-in.

One analysts predicts that 5 million iPads will be sold in the first half of this year.

At yesterday's Beet.TV Online Video Roundtable, Adobe's Steve Allison declared that while HTML5 is promising and Adobe is supporting its development, it is not ready for use.

He said that Adobe will release its own technology to allow publishers to make Flash videos work on the Apple platform. Adobe's Packager for iPhone will be released this year he said.

Jeff Whatcott, Senior VP at Brightcove said that while HTML5 is indeed in its early stage, and lacks many of the essential elements of Flash, such as ad insertion and analytics, the company is creating solutions for customers.

Questioning the panelists during this segment is my co-moderator Robert Andrew, editor of paidContentUK.

Our conference was held at the Guardian offices.  Much more to come.

Update:  ReadWriteWeb has an analysis of performance of Flash vs. HTML5.