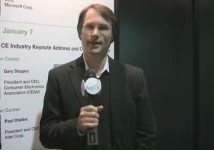 LAS VEGAS, NV — On the heels of its partnership with Nielsen late last year, Microsoft's XBox Live is now focused on deploying the joint measurement capabilities more broadly across the XBox Live service, the software giant's Dean Carignan told me during an interview at the Consumer Electronics Show on Friday.

Carignan is the director of advertising for XBox Live and has played a critical role in the Nielsen-XBox pair-up. Under that deal, XBox is working with Nielsen to measure audiences for XBox Live in the same way Nielsen tracks TV audiences. The end result is to deliver a GRP (gross ratings point) for advertisers for the XBox Live audience, which allows marketers to compare apples to apples when placing ad buys. TV audiences are measured using GRPs. The partnership has the potential to deliver comprehensive three-screen measurement data to advertisers.

XBox is largely known as a gaming console, but is increasingly being chosen by XBox Live's 20 million users as a platform to watch TV shows and movies too.

XBox and Nielsen piloted the system in the fall using the "1 vs. 100" trivia game on XBox. "The test was successful," Carignan said. "Now we are figuring out how to deploy more broadly and how to take the raw data and translate that into GRPs."

Also at the show, Carignan said he has his eye on capabilities of connected devices like DVD players and game consoles that tap into mobile phones and TV's.

In Related News, Online Video to Stream on Wii

Meantime, The New York Times is reporting that the Ninteno's Wii will be streaming video shortly.

Update:  1/19 — The New York Times is reporting that ESPN will stream on the XBox live.

By Daisy Whitney on January 13, 2010 @daisywhitney