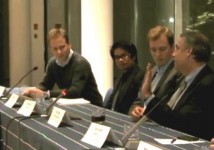 WASHINGTON, D.C. –  Stung from  the 2008 election losses, Republican members of Congress are uploading videos to YouTube in much greater numbers than Democrats.

"It's been very stark to see how eager the Republican Party has been to get on YouTube….uploading tons and tons of videos to YouTube.  Absolutely a fire has been lit under that party in terms of YouTube, specifically."

In January, YouTube launched HouseHub, site which provides each member of the House of Representatives their own YouTube channel.

A separate YouTube site for the U.S. Senate is called "Senate Hub."

Earlier in this segment, veteran political strategist Joe Trippi says that the Republicans are making waves as the "insurgent party."

With a different take is NBC News Washington Bureau Chief  Mark Whitaker. He says that Republicans have had the more sophisticated approach to media for many years.

Later in this video, Obama campaign video strategist Max Harper says that many despite the the battle between the parties, many young people are not aligned with parties but movements.

Some reports find that the Republican party is more successful on Twitter.

Nancy Pelosi Has Viral Hit with Her Office Cats

If the Republicans are winning on YouTube, House Speaker Nancy Pelosi is putting up a good fight .  She has 1,835 videos uploaded to YouTube and 250,000 channel views, which makes her among  the most prolific uploader in Congress.

She seems to have a viral hit with her video entitled The Capitol Cat Cam (pasted below).  It has 377,704 views.

This is the first of a series of segments edited from the two-hour event held on December 1 at the Embassy of Finland in Washington, D.C. If you'd like to watch the entire program, you can find it looping on our Livestream channel.