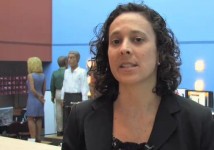 Though it only has  two years of online video availability under its belt, the NFL is in the game for new media opportunities.

That's what the league's Laura Goldberg told Beet.TV at the NewTeeVee Live event in San Francisco last week. She's the general manager of NFL.com and she said the league is particularly keen on mobile opportunities for its games.

"We are trying to find more and more ways to offer the games online, and mobile is becoming more and more important," Goldberg said. Currently, the NFL has a partnership with Sprint letting Sprint customers watch Thursday night games on their cell phones (such as the recent San Francisco 49ers-Chicago Bears Thursday night match-up) as well as highlights.

In addition, iPhone users can watch all games on their mobile phones if they have DirecTV's $199 per season NFL package, known as "Sunday Ticket," and the SuperFan $100 upgrade. The league introduced the iPhone option with DirecTV  for the first time this season. The SuperFan option lets Sunday Ticket customers watch the games on their iPhone and computers, as well as via DirecTV.

"You will see the importance of the mobile phone growing" Goldberg said.

Sports has been one of the last programming categories to migrate online because the content is so valuable. Also, because sports are live, there is an inherent immediacy to watching them on television and other traditional means.

That's why the NFL, America's most popular sport, waited until 2008 to offer some of its games online. Still, leagues such as Major League Baseball have made aggressive moves to offer games online. MLB streams nearly all its games online in a subscription package and via a number of over-the-top services such as Boxee and Roku. The NFL has been testing online video by carrying its Sunday night NBC game live online since the start of the 2008 season. According to comScore, the NFL Internet property counted 6.4 million unique viewers in September, up 81% from a year ago. They watched nearly 49 million videos, up 140% from a year ago.

By Daisy Whitney on November 19, 2009 @daisywhitney
Tweets by Beet_TV