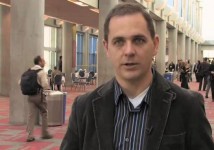 Introduced originally as videogame console, the Xbox from Microsoft is fast becoming a powerful video viewing device with the introduction of Zune, the new video streaming platform.

The device connects to the Internet and streams high quality video.  It has a number of offerings including Netflix, Last.fm, integration with social networks, and new video product called Zune.

A number of the enhanced services are available via a $50, annual subscription to Xbox Live Gold.  This weekend, Microsoft is offering free sign-ups for the service as a promotion.

We caught up with Xbox General Manager Marc Whitten on Wednesday at the Streaming Media West show in San Jose.

Marc told us that 25,000 "pieces" of premium video content are up on Zune for the launch.