Tim Berners-Lee to Hollywood: Move from “Channels” to Random Access 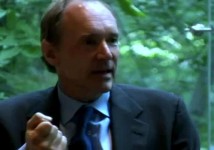 WASHINGTON, D.C. — Sir Tim Berners-Lee, inventor of the World Wide Web, says that as video on the Web continues to grow, the movie industry needs evolve from a "channels" scenario to a "random access" platform, where films can be universally searched, watched, and paid for.

In accomplishing this, producers need to provide much greater metadata around their content.

The transformation of video onto a data-rich "semantic Web" is a key objective of the World Web Consortium, the Boston-based group Sir Tim heads.

Joost Was a Trailbaizer in the Semantic Web

Two years ago, we interviewed the W3C's Chief Architect Philippe Le Garet on the implementation of the semantic Web with data and video.  Philippe addresses the pioneering work of Joost in creating rich metadata around its content.  (But Joost has seen better days, it is closing its UK subsidiary, according to a report this morning by Robin Wauters on TechCrunch.)

I interviewed Sir Tim last week in Washington at the Embassy of Finland at a technology symposium presented by Finland's Technology Academy Foundation.

Here is a 37-minute video of Sir Tim on stage at the event with New York Times reporter Steve Lohr.

My first interview with Sir Tim was about the open data initiative and the U.S. and British governments.

Sir Tim Burners-Lee: Video on the web is obviously huge. Clearly it is a luxury for people who have high bandwidth, but when you've got high bandwidth, why should you ever have to choose from a limited menu of movies to watch tonight? Why shouldn't I just be able to watch any movie that had ever been taken, paying the appropriate price. So I think what's happening is the whole movie industry is going to have to realize it's gonna go from something beyond a channel at a particular time to everything being randomly accessed.

There's always a need also for open standards of course for the transition of the video itself.