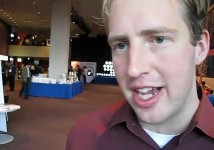 NEW YORK, NY — The White House has signed an agreement with TubeMogul, an Emeryville, California-based start-up to distribute and analyze web videos, said David Burch, a TubeMogul executive, in this video interview.

I interviewed David this afternoon at the Personal Democracy Forum. (Please see the transcript below.)

TubeMogul allows video producers to syndicate content to as many as 24 different video sharing sites with one one upload to the TubeMogul site.

It offers two tiers of service, a free product and a paid service, which provides analytics on video usage.  The White House has opted to use the paid service.  It is using the service to upload to at least two sites, YouTube and Vimeo.

This agreement does not include any services or support for the White House's in-house video channel, which is managed internally.

David was on a panel about video and political campaigns with Steve Grove of YouTube, Jacob Soboroff  of Why Tuesday, and Max Harper, a key video producer in the Obama presidential campaign.

Last week, TubeMogul added video publishing site Castfire to its network of site.  Recently I spoke with TubeMogul's Mark Rotblat about how the company is being used by companies and organizations.

Left and Right Come Together at the Conference Here's a shot of veteran Democratic strategist Joe Trippi (left) and Todd Herman, the newly appointed new media director for the Republican National Committee. Todd is former Microsoft exec.  I interviewed him three years ago.  He was a featured speaker this morning.  Here's a report on his speech and other news from the conference by Erick Schonfeld in TechCrunch

David Burch:  So I'm here at Personal Democracy Forum representing TubeMogul. I direct our marketing. I'm just here…we're on an online video panel and we're talking about a lot of our research around video viewership and I am happy to announce that we recently signed the White House and they're going to be using us to distribute their videos to several sites to be able to reach voters and citizens, kind of, where they are online. So, go beyond just YouTube. They're also going to upload with Vimeo and I believe one other site, and we got in the fax machine came an Executive Order from the President, which I guess is what happens when you sign. So we're very excited about that and excited to be here and see how technology's changing politics.