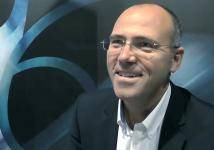 News reports today indicate that Mozilla's Firefox 3.5 will be publicly available next week.  One of the most significant elements in the new release is the ability to play web video without a plug-in.

The browser comes with an open source video codec called Ogg Theora.  Last Friday, at the Open Video Conference in New York, I interviewed Mark Surman, executive director of the Mozilla Foundation, the non-profit organization which has developed Firefox.

He explains the importance of open video standards.  He says now video on the Web is in a "black box."

When I asked him how his organization could challenge the dominance of Adobe and its ubiquitous Flash ecosystem, he pointed Mozilla's remarkable success, gaining 22 percent market share of browsers, having taken away 20 percent of the market from Microsoft Explorer.

Like publishing text and still images which are free to use on the web, he told me video should be provided for free, not just by folks "trying to make a buck."

How fast can Mozilla's Firefox create a new open video world?  It's going to take some time.  We explored this topic earlier today on Beet.TV