BrightLine Turns Up The Volume With More Interactive Ad Products 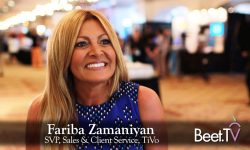 The agency involved in those ads is Havas, but the technology outfit enabling them is BrightLine. Now BrightLine says it will build on the launch by offering more ad formats from January.

Current features include “geolocate the viewer, inform them about local deals, the ability to buy your movie ticket, to full, branded, immersive experiences that look like microsites on your television,” BrightLine CEO Jacqueline Corbelli tells Beet.TV in this video interview.

“Hulu has gone a long way to create things that feel very natural to the viewer and we have several new products that will be launched at CES.”

BrightLine launched in 2003 to bring interactive ad experiences to TV. It just happens that it took more than a decade for the technology to get in to living rooms, to allow TV sets to benefit fully.

But now the over-the-top TV opportunity is really taking off, and Corbelli – whose clients also include ESPN, AMC and Disney – is excited.

“When Peter (Naylor, Hulu’s ad sales SVP) gave us the opportunity to go full-footprint across their entire app audience in the living room, we grabbed it,” she adds.

“We’re bringing the marketplace a way to target across digital screens and, from a measurement standpoint, to bring accountability to television advertising that, heretofore, was limited.”

By Robert Andrews on October 24, 2016 @robertandrews