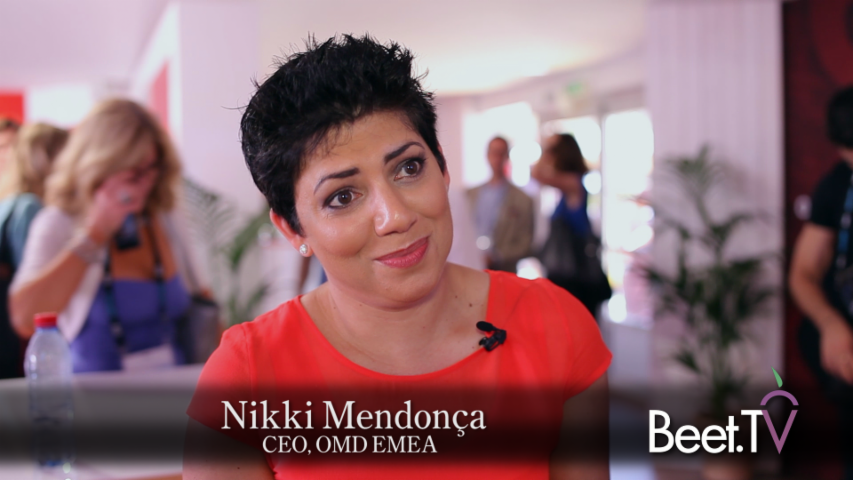 CANNES – Purpose marketing that’s built into a brand’s DNA can mean survival or distinction, particularly when younger consumers are the targets. It’s one of the takeaways from all of the discussion at the Cannes advertising festival for OMD’s Nikki Mendonca.

Credit it to the age of instant and viral digital communication.

“Your brand is really all about how you behave and to be honest it is the power of the smartphone that has revolutionized that approach to authenticity,” says Mendonca, the CEO for Europe, Middle East and Africa. “Because everything now can be captured with a camera on a smartphone. So it really has to be incredibly transparent, the relationships that brands have with consumers.”

In fact, authenticity translates to live or die. “If you do not have an authentic approach to communicating your brand, your company might not actually live very long,” Mendonca says in an interview with Beet.TV.

OMD, a unit of Omnicom, has had great success for clients like Doritos, Pepsico and Nissan by eschewing generic corporate speak in reaching out to target audiences that include the LGBT community, according to Mendonca.

“It’s almost like changing the language, dropping any kind of corporate language, and making it a part of the brand’s DNA,” she says.

What excites Mendonca about story telling for brands are the choices they have for message distribution. “What’s really interesting is that in the amplification space, there are many more technology companies to choose from to actually start to scale that storytelling,” Mendonca says. In addition, “to also do it in a way that’s relevant locally so that you get the double benefit of global communication but landing locally,” she says.

Mendonca led a panel discussion about the power of influencers like bloggers in their role as content distributors. “They almost represent the breadth and depth of channels, and we’re getting much more sophisticated at being able to ascertain what influencers should we actually hook brands up with and why,” she says.