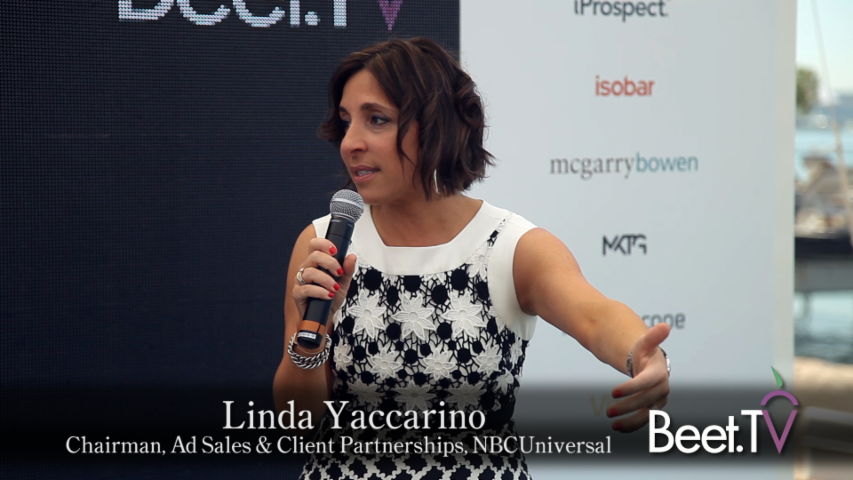 CANNES – The television industry needs to act less “precious” about its assets and be more aggressive in finding ways to expand measurement options. This was the view shared by NBCUniversal’s Linda Yaccarino at a discussion sponsored by global media agency Carat.

After laying out her company’s three priorities—content investment, data and analytics development and more partnerships—Yaccarino reflected on the immediate past and how industry attitudes must change.

“If you rewound what seems to be recent history, the last three to five years, some legacy media companies were much more precious about their brands, our brands and their content,” said Yaccarino, who is Chairman of Ad Sales & Client Partnerships. “We have to become less precious and share our brands and actually push them out across all platforms.”

Such openness can be “quite liberating,” according to Yaccarino. “The interaction with the consumer increases human touch time. They stay with your content longer. Therefore the engagement is right,” she observed.

Touching on a mutual concern, moderator Doug Ray, Carat’s U.S. CEO, asked about the lack of inertia he sees within the industry with regard to measurement issues.

“If we don’t force the evolution of measurement in our entire industry, that would be the worst thing that could ever happen,” Yaccarino responded. The standard C3 rating period for TV audience measurement “actually does nothing for our ROI, it doesn’t move product off the shelf.”

She was just as critical of some media companies that went overboard on advertising load during programming. “Some of those companies that are reducing the commercial load really took advantage of the consumer,” Yaccarino said.

She saw a bright spot in the ever-growing video-on-demand space when the broadcast networks picked up all their new shows for the fall season and negotiated full in-season stacking rights from studios.

“You’re going to see an increased population of content in VOD so the consumer has access to much more content that can be monetized for all of us in this room,” Yaccarino said.

This video was recorded at Cannes Lions 2016 at a Beet.TV leadership summit on advanced television and advertising hosted by Carat. For more segments from the session, please visit this page.

By Steve Ellwanger on July 14, 2016 @steveellwanger