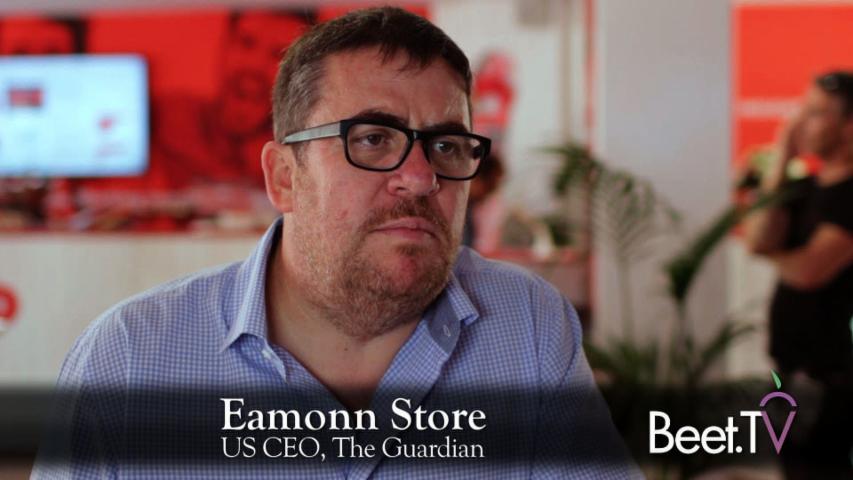 Back in the eighties, Eamonn Store piloted Royal Navy ships around the Caribbean. Now the former advertising executive is the latest chief at the helm of The Guardian’s New York-based US division.

In choppy waters filled with threats and opportunities ahead, Store is plotting a course for a publisher that will swerve around advertising revenue chances if they don’t fit The Guardian’s overall mission.

“We don’t run many auto-play formats because we know it annoys our readers,” Store tells Beet.TV in this video interview.”

We could make more money from it – but we don’t, because that’s not our primary, driving factor. If it’s intrusive, then we won’t run it.”

“Ad blocking is an issue which, as an industry, we created by this continual hunger for short-term commercial return,” he says.

“Ad blocking is very low on The Guardian. We are 60% mobile (audience) and ad block is less than 0.5% of our 60%. The reason is, we focus predominantly on the reader and the viewer, that’s all we care about.

“The money will come from where it comes from. We’re not constantly trying to invent new formats and short-term incentives just to drive new revenue.”

Some may say that aversion to making money is one reason Guardian News & Media is in its current predicament. Under new corporate and editorial leadership, the publisher in March announced a further 250 job cuts on the back of a £58.6m annual loss.

But the publisher, which is run by the Scott Trust to preserve its journalism in perpetuity rather than to delight shareholders, is hoping to balance the following as growth drivers:

“Strong, branded content, where we can build deeper, more meaningful stories is more interesting to us for our future than quick in-stream or otherwise formats that don’t do anything to add to the user experience,” Store adds.

Store even says Guardian Labs, the division producing creative editorial content for brand clients, is “the revenue engine that drives commercial success in the US”.