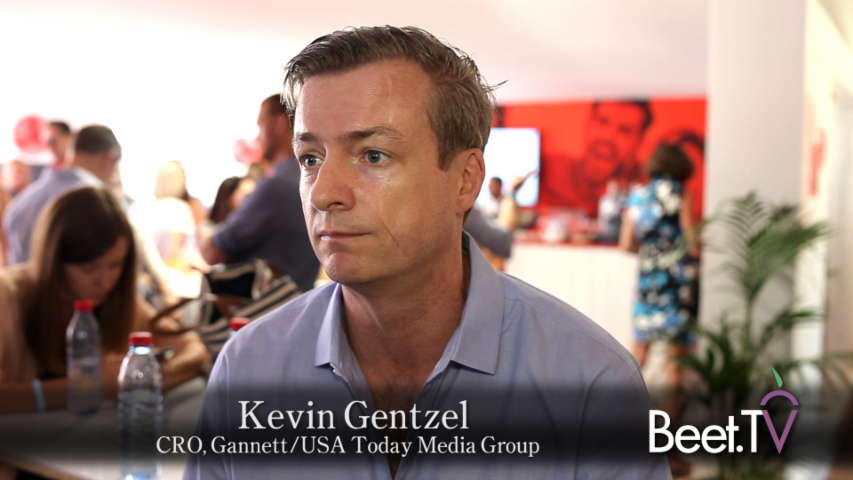 CANNES — USA Today’s weekly virtual reality news show “VRtually There” may not even have launched yet – but that isn’t stopping the news publisher from touting the product to advertisers, all the same.

Publisher Gannett announced in March that VRtually There would launch in the spring, bringing scheduled weekly news to consumers in virtual space. Speaking at the Cannes Lions advertising festival in June with Beet.TV, the group’s chief revenue officer said launch would now happen in the summer.

Kevin Gentzel said he was there to talk with agencies and clients. “It’s such an exciting time to work with brands, to help them tell their stories in virtual reality,” he said. “Right now, there are no IAB-standard advertising definitions in virtual reality. We’re trying to work with brands who want to be thought leaders in the space, to create and invent and build together.”

Already, USA Today has published 360 branded video on behalf of Honda and Tourism Australia. Rather than include commercial interruptions, the content instead puts viewers in the seat of a race car and soaring over blue Pacific waters, respectively.

Gannett is the latest publisher to produce content for VR, and to tap up advertisers to fund the new channel. New York Times put cheap Google Cardboard viewers in the hands of 500,000 print home delivery subscribers, and has been publishing regular content to its NYT VR app. CEO Mark Thompson told Beet.TV his company would make money from VR in 2016.

Gentzel thinks Gannett has a different offering. “One of the elements that has been missing is publishers … who is committing to a regular rhythm of VR storytelling,” he said. “We’ve seen many media companies dip their toe in, publish one thing and then go away, go dark. Our commitment, consistency and experience with the space is going to help drive the market for consumption.”

With 360 or VR product launches from Facebook, HTC, Oculus, Samsung and others, 2016 is shaping up to be a year when the race to be VR platform of choice begins in earnest.

So what about the content? Gentzel, whose publisher has already been posting occasional 360 videos online and through its VR Stories app, says “first-person fantastic” experiences like riding in a race car, walking a tightrope or swimming with sharks work well in the virtual world. At the regional level, he wants to take people to American cultural celebrations like Burning Man and the Iowa State Fair.

What’s the advertiser opportunity there? “We have been testing the right amount of length for content and branded content segments in virtual reality,” Gentzel says.