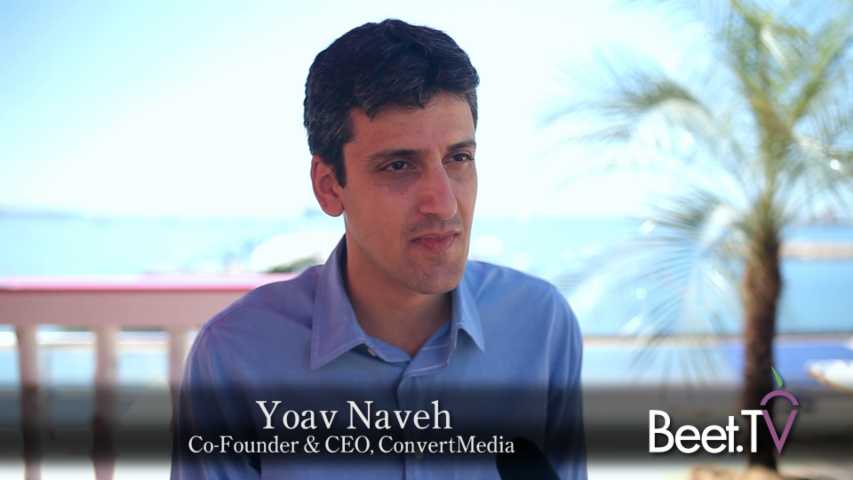 CANNES – When it comes to selling ads, can web publishers make more money by doing less? The co-founder and CEO of ConvertMedia thinks so, citing a “race to the bottom” with fixed banner ads.

Yoav Naveh, who heads the outstream video supply side platform, believes publishers became fixated on fixed banner ad placements, to the ultimate detriment of the users.

“I think we got to a point where that has created a pretty bad experience,” Naveh says in an interview with Beet.TV. “There is a race to the bottom with more and more of these units that you have to sell because it’s fixed real estate and you have to sell that.”

He cites as one drawback to fixed banner ads their adjacency to real content, which minimizes their impact for advertisers. But the dependency of publishers on this particular ad format has had a domino affect.

“It kind of created a situation where advertisers have to be more and more aggressive with what they’re doing and publishers want to make money, so they add more and more of these units and users just simply get annoyed by it,” Naveh says.

Now, with the huge growth in mobile devices, the industry needs to jettison its mindset of “we have to sell an ad at all costs,” according to Naveh. Dynamic real estate should supplant fixed real estate and, if done right, fewer ads will be shown but with higher individual impact.

“If you do it right I think you can actually make more money,” Naveh says. “And I think that’s the holy grail, right? Make more money by doing less ads is a win win situation.”

While in Cannes, Naveh has been soaking up the outpouring of creativity with an eye toward trying to figure out how publishers can benefit from it while doing their part to better engage consumers. Publishers need to do more than just say, “Well, I’m giving the real estate and hopefully from now on the advertiser can figure it out,” says Naveh.