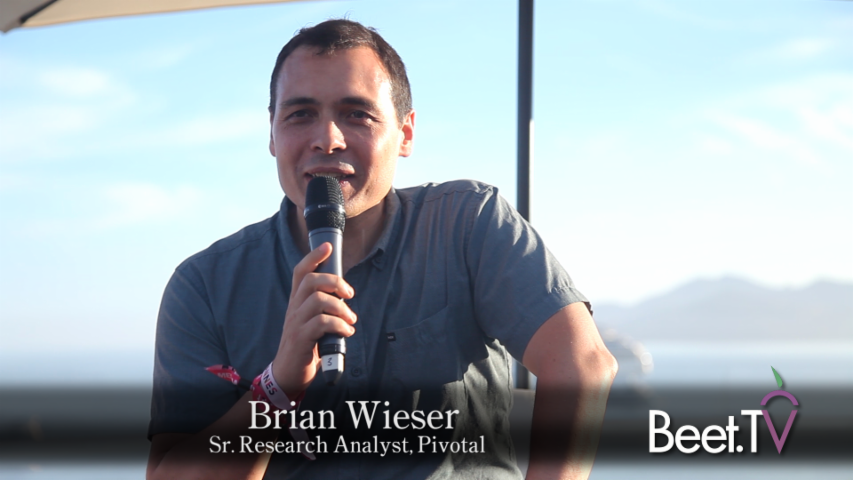 CANNES – The advertising industry’s reaction to a report critical of advertising and media agencies that the Association of National Advertisers (ANA) believes pad their compensation via non-transparent tactics continued with a testy waterfront exchange here. It’s a subject that won’t be going away soon.

Beet.TV was present for the contentious discussion sponsored by Rubicon Project and moderated by the company’s SVP of Marketplace Development, Jay Sears, that featured Nancy Hill, president of the American Association of Advertising Agencies, and outspoken Wall Street analyst Brian Wieser of Pivotal Research Group.

Hill continued her group’s criticism of the report for its lack of hard evidence and declared that, by and large, the major advertising holding companies and their multinational clients are on the same page about their relationships and contracts.

“What I will tell you in terms of the feedback we’ve gotten from our agencies is that for most part, the holding company agencies and their multinational clients are fine,” Hill said. “They’ve been talking all along about this and they’ve had many, many, many, many discussions.”

She then cited the $35 billion in media reviews over the last year seemingly as evidence that non-transparent behavior would be discovered at the negotiating table. “You can bet that those contracts were scrutinized to the letter going through that whole thing,” Hill said.

To say that Wieser, who like Hill used to work for Interpublic Group, was not convinced is putting it mildly. Asked by Sears if the industry had “hit bottom” on the issue, Wieser flatly said no.

“The question really is, is this Thelma & Louise or is this The Detour? I think that what it is remains to be determined,” Wieser said.

He characterized some of the response from agencies to the ANA report, which was done with the security consultancy K2, as “antagonistic,” citing the Publicis holding company as an example. Tongue firmly in cheek, Wieser stated: “I would opine that the general nature of the reaction felt to me like it generally disregarded that there is a problem of perception, at minimum.” For agencies, he added with a chuckle, “Perhaps it’s just a very significant misunderstanding.”

The back and forth led to Hill and Weiser to interrupt each other while parsing the ANA report’s conclusions, which Hill rapped for being “anonymous of course but it’s also a lot of allegations.” That led to this exchange when Wieser said the report could have been even more critical of agency behavior:

Wieser: “There’s a lot that wasn’t covered I would say. In other words, it could have gone on I think and they would have gone on, by the way, if the holding companies had participated.”

Hill: “They have contracts that are all NDA that would not have allowed them to have those things except at a very high level.”

Wieser: “Well you can understand why K2 was incomplete in the report, right?”

Hill: “Which is why we advocated for not doing this kind of investigation in the first place.”

According to Hill, once the ANA releases recommendations for advertisers and agencies derived from the K2 probe in about a week, “We would like to sit down with the ANA and talk about where we can find common ground.”