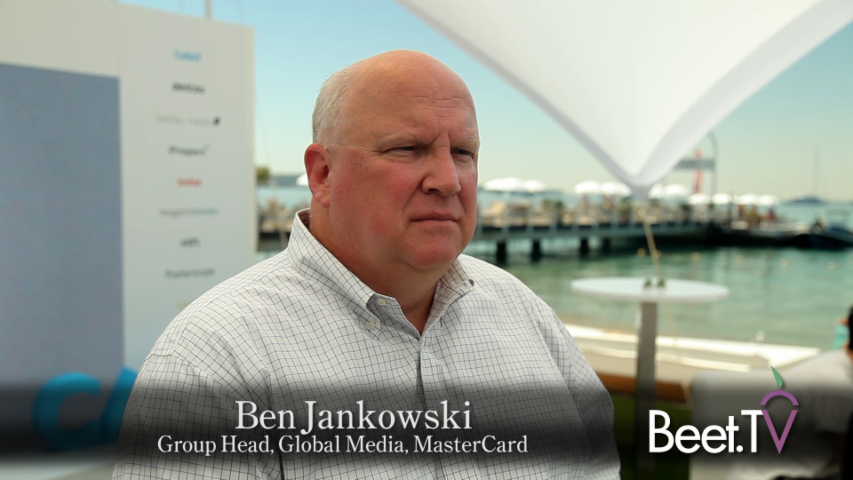 Jankowski welcomes the discussion at the Cannes Lions of the evolving meld of creativity and technology. “To bring that to scale we have to get the whole community together, and I think it was a good conversation around how do we get everybody together,” he says in an interview with Beet.TV.

Among the “cool stuff” that MasterCard has done is a series of brief videos centered on the 2015 Rugby World Cup competition. One featured Martin Johnson, who was the captain of the winning 2003 team from England, explaining how important it was to beat Wales. “Rather than take celebrities and put them on a movie set and produce the multi- million-dollar piece of film that you run in 30-second forms, we put them in a hotel room on a couch,” Jankowski says of the personalities in the videos. “By producing more quantity we can drive higher engagement.”

MasterCard’s goal is to empower consumers by applying data to tell better stories, “moving us from storytellers to story makers,” Jankowski says. “It’s super exciting. Not only exciting because it brings us closer to consumers but selfishly it helps us be more impactful and efficient with our investments.”

On the subject of addressable television advertising, Jankowski says the challenge for marketers is figuring out the messaging side of the equation.

“Technology has helped us find people and distribute messages to people, which is fantastic,” he says. “The challenge we have to figure out is how do we deliver messages and in an affordable and meaningful way. We can’t simply quadruple, quintuple our production costs. It’s not feasible. We have to figure out the content side. It’s a journey and we’re working on it.”

We interviewed him last week in Cannes where he was a participant in session on advanced TV hosted by Carat. Segments from that session will be forthcoming.

Beet.TV interviewed Jankowski as part of our series on addressable and the new world of television advertising. This series on Beet.TV is sponsored by AT&T AdWorks.