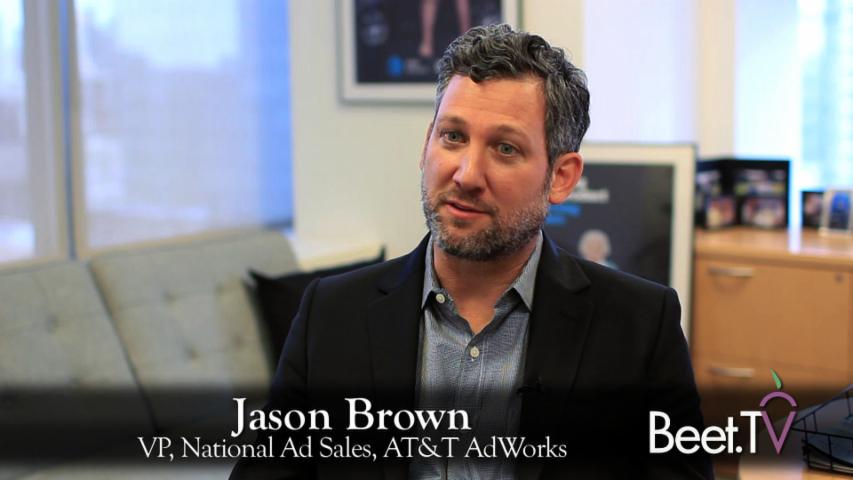 The word “scarcity” as applied to commercials within television programming typically has pertained to programs or hit series. But with addressable TV ads, “the scarcity comes around an attribute,” meaning the ability to target coveted audiences, according to Jason Brown, VP of National Ad Sales at AT&T AdWorks.

“In certain categories like automotive, where all but three are using the product, you can imagine that there is scarcity for the attribute,” Brown says in an interview with Beet.TV. “What I mean is that at any given time, only three percent to four percent of the population is in the market for a vehicle. It’s a very coveted audience.”

As AT&T wends its way through some 100 Upfront negotiating season presentations, Brown sees his role as that of a consultant to agencies and advertisers, now that AT&T’s addressable business has been in the marketplace for more than four years.

“This addressable product is very consultative,” Brown says. “We work with brands and agencies to help define the target, to optimize and to prove out real life outcomes, like sales or website visitations.”

Buyers should not expect to see a standard broadcast TV rate card when considering addressable advertising. Each category is different because the value of converting a viewer to a customer is higher in, say, finance or auto insurance than in packaged goods.

“Our rate card so to speak is not a traditional rate card. It’s based off of vertical and type of product within each vertical and the value to convert them,” Brown says.

The change of attitude toward addressable TV ads over the past few years “has been nice to see,” Brown adds. “There’s enough traction in the marketplace. The benefits are out there. It’s beyond testing.”

Within the evolving TV ecosystem, as vendors try to figure out their data stack and the technology needed to optimize their inventory, agencies have better data to measure the marketplace.

“At the top of that pyramid is addressable TV because it eliminates waste,” Brown says. “The buying community is very interested in understanding how to activate this year. It’s more than just educating them.”

Beet.TV interviewed Brown as part of our series on addressable and the new world of television advertising. This series on Beet.TV is sponsored by AT&T AdWorks.

By Steve Ellwanger on May 11, 2016 @steveellwanger