ConAgra On Addressable TV: Driven By People, Not Media 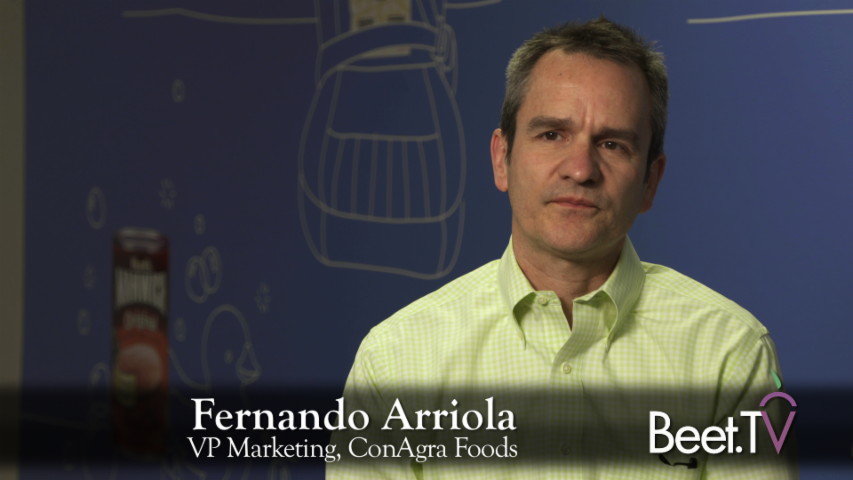 NAPERVILLE, IL – Having used addressable television advertising for almost three years to better target certain consumers, ConAgra has established deeper relationships with addressable households because they are driven by people, not media.

According to Fernando Arriola, the consumer packaged-goods marketer’s VP of Marketing, who Beet.TV interviewed at the company’s headquarters, addressable TV is a big departure from the traditional way of buying media by networks. Traditionally, ConAgra might have advertised on Food Network, USA Network and Turner but might not have bought ESPN or History. With addressable ads, if a targeted household “happens to be watching ESPN and History and we’ve triggered an addressable buy there, then we can expose them whereas we might not have exposed them otherwise,” Arriola says.

ConAgra’s strategy for using addressable varies by brand and objectives, as does its choice of programming. “Sometimes it’s more contextual, if we want to go into a certain environment,” Arriola explains. “Sometimes the environment isn’t as big of a deal as the aperture of the people we’re going after.”

ConAgra predominantly uses addressable inventory to promote brands that are more heavily skewed to certain parts of the country or have a lower household penetration, Advertising Age reports.

With a still-evolving solution like addressable, Arriola isn’t focused solely on cost.

“When things are new, like addressable TV, we don’t tend to focus on pricing as much as kind of how the system works and what the results are,” Arriola says. “I’m not saying it gets a complete hall pass. But pricing isn’t the key driver. It’s one of the considerations going in.”

Overall, ConAgra has found that it has more potential advertising exposure opportunities on any given night because it’s not buying TV on a network-to-network basis. Instead, it’s targeting particular households regardless of what the people inside are watching.

“Our ongoing relationship is a little bit deeper in the households with addressable just because the addressable household is driven more by the people not as much by the media,” says Arriola.

Beet.TV interviewed Arriola as part of our series on addressable and the new world of television advertising. This series on Beet.TV is sponsored by AT&T AdWorks.