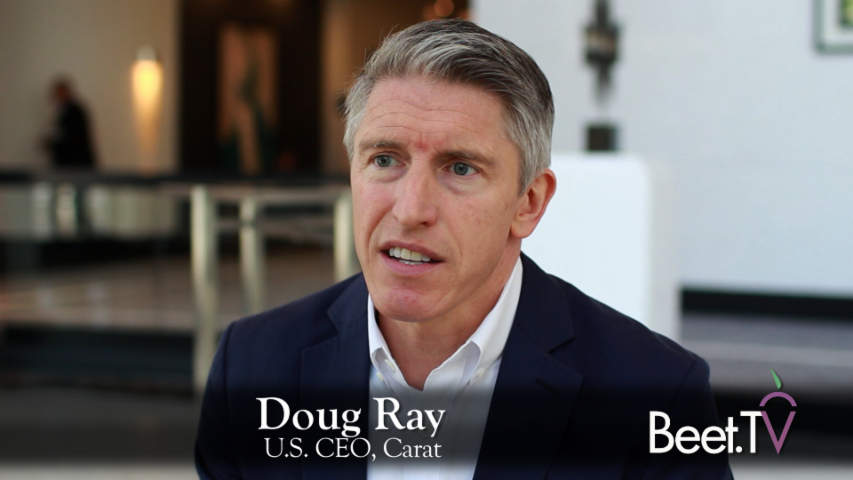 In what he sees as an “unprecedented” television UpFront negotiating season this year, the U.S. CEO of media agency Carat sees more TV budgets migrating to venues like online video and believes his company will work with fewer providers to extract the most value in the marketplace.

“At the same time, we’re seeing consumers migrating to multiple different platforms and clients are getting much more comfortable thinking about multi-channel, multi-platform,” Rays says in an interview with Beet.TV.

The heightened comfort level is due in part to industry progress on solving currency issues, with the availability of Nielsen’s Online Campaign Ratings and comScore’s Validated Campaign Essentials, among others. And then there are more comparisons of the performance of linear TV with other video platforms.

Ray says Carat looked at 50 brands and has data showing that, on average, online video delivers about a 50% higher return on investment than linear television yet television continues to deliver significantly more volume contribution—by a factor of four to six times.

“We’re finding about 20 percent to 30 percent of TV dollars should be spent on online video and when optimized like that we’re seeing on average a 15 percent improvement in total sales,” Ray says. He adds that during the UpFront season, Carat probably will engage in “fewer, bigger, deeper partnerships” to continue to extract the most value from sellers.

“When I say that, it’s not just about saving money. It’s about getting more value out of the partners we work with,” Ray says.

Beet.TV interviewed Ray as part of our series on addressable and the new world of television advertising. This series on Beet.TV is sponsored by AT&T AdWorks.