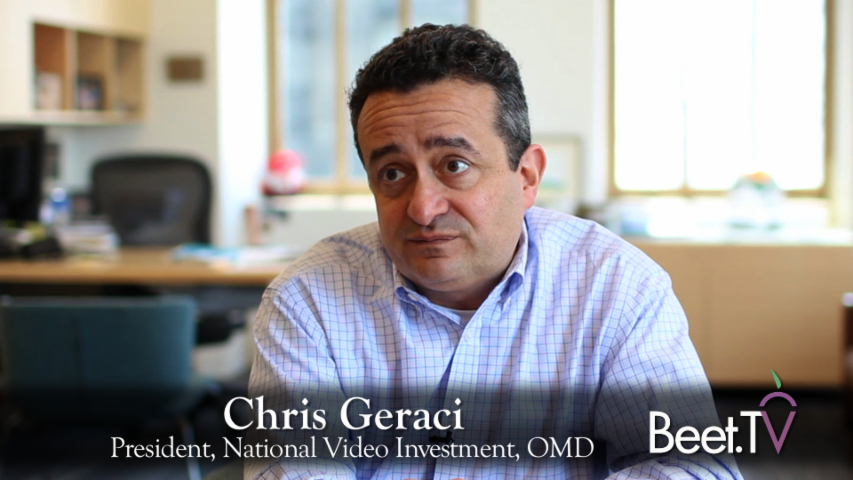 Geraci, who is President of National Video Investment at the OMD unit of Omnicom, cites as memorable Upfront events those of Hulu, Google Preferred and Condé Nast—a mixture of traditional and new media offerings. He says media owners did a good job of presenting their content in the environment in which it’s meant to be viewed.

Google Preferred stood out for “presenting some of their super popular talent in an environment that I think lent itself to the kind of excitement that they get against that younger demographic,” Geraci says in an interview with Beet.TV. One sign of how far the online search giant, via its acquisition of YouTube, has progressed with online video is that advertising holding company Interpublic recently said it would move $250 million of its ad budget earmarked for TV to YouTube’s Google Preferred ad program, FORTUNE reports.

Now that TV stalwarts like Geraci are involved across the spectrum of video choices, it’s harder for media sellers to command premium prices without pushback.

“Pricing has changed a lot, certainly now that you’ve got more folks like me and my team involved in it,” Geraci says. “You can’t necessarily get away with a super premium price point versus traditional television. There’s too many of us now who are seeing both sides of the marketplace.”

Nonetheless, Geraci says an argument can be made that certain online video content could warrant a premium.

“If you’re able to sort of cordon off the best stuff online and say that this premium group of online videos is within the consideration set for traditional television budgets and there is price parity across it, then I think it’s better for both sides,” Geraci says.

With regard to addressable TV advertising, Geraci says he wishes the industry by now had achieved what Canoe Ventures set out to do in 2010: enable marketers to target TV households based on their specific desires. He believes more scale is needed because of the costs involved in piecing together addressable ad buys cable system by cable system.

Beet.TV interviewed Geraci as part of our series on addressable and the new world of television advertising. This series on Beet.TV is sponsored by AT&T AdWorks.

By Steve Ellwanger on May 16, 2016 @steveellwanger