A Down UpFront Means an Upside for Addressable TV: SMG’s Scheppach 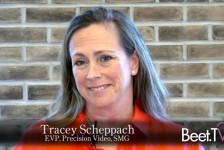 CHICAGO — The amount of money SMG advertisers are spending on so-called “addressable TV”, which helps buyers target unique consumers via cable and satellite boxes, with Internet precision, is on course to double this year.

“We sized the addressable market for 2014 at about $300 million,” says Tracey Scheppach, EVP of Precision Video at Starcom MediaVest Group, in this interview with Beet.TV. “This year as of May 1, we have already placed more money in to the market than we did in all of last year. We’re seeing at least a doubling of the market in 2015.

“We’re seeing tremendous growth in demand for this, because it really is the most precise and accountable you can be on television.”

Scheppach says the recent US TV upfront ad-buying season was “down” from a year earlier, but says this spurs innovation. In her quest for precision, SMG’s Scheppach has been trying out two ad tech vendors that give her extra data to aide TV ad buying:

At Cannes Lions on June 23, Scheppach will participate in a leadership summit organized by AT&T AdWorks in partnership with Beet.TV, on the topic of addressable advertising.