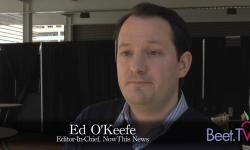 AUSTIN – "Now This News." a New York-based video news start-up, launched in September with funding from the co-founder of the Huffington Post and the backer of BuzzFeed, plans to follow the success of BuzzFeed, but with video, explains Ed O'Keefe, Editor-in-Chief, in this interview with Beet.TV at SXSW.

O'Keefe, a veteran of ABC News, says that his staff of 30 are creating daily videos which are produced with the mobile consumer in mind as mobile is the primary platform for consumption, he explains.

On the monetization side, the short clips will have no pre-roll.  Like the ad strategy at BuzzFeed, the publisher will work with brands in associating them with the content, using the same distribution platform.

We spoke with O'Keefe on Monday after his panel moderated by Yahoo Studios chief Anna Robertson.   Much more to come from the panel participants.