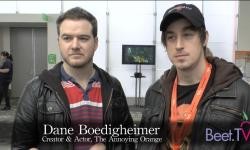 AUSTIN — One of the keys to success in migrating a Web show to TV is to stay true to its roots, but also to grow from them, according to the creators of Annoying Orange. Beet.TV caught up with Dane Boedigheimer and Kevin Brueck, the founder and producer, at the recent SXSW show in Austin to discuss the transition from the Web to TV.

Annoying Orange launched as a YouTube show and after becoming hugely popular, cable network Cartoon Network picked up the show for its lineup, in one of the most notable examples of a Web phenomenon becoming a regular on-air program.

Annoying Orange is in its second season on Cartoon Network. The creators worked with The Collective, an entertainment management and production company, in creating the pilot and inking the deal with Cartoon Network, explains Brueck. "Once we started doing the TV show we didn't want to alienate the online audience because the Annoying Orange has a global audience so the Collective helped," he tells us.
Also smoothing the transition was the focus on sticking to the show's roots.

As a Web show, Annoying Orange had landed celebrity guest voices from James Caan and John Leguizamo, and on cable has snagged Billy Dee Williams, Michael Clarke Duncan and more.