‘Vampires’ Creators On Producing Documentary-Style Content For The Web 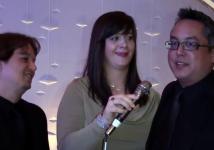 ‘Vampires’ is a documentary web series about a group of people in New Orleans who believe themselves to be vampires. We caught up with the show’s creators, David Schatanoff, Austin Smoak and Dan Ast, at the IAWTV Awards at CES to glean some advice on producing documentary content for a web audience.

Smoak explained that the team “ended up choosing web because we had a bunch of small things that we wanted to tackle that we felt would work best as more episodic, 5-10 minute episodes and we felt like the web could get it out to a lot of people and sort of show a lot of people what our topic was.”

Ast says that the biggest differentiator between producing documentary content for the web, as opposed to a long-form film audience, takes place “in the editing room—deciding how to tell a story in a short form as opposed to trying to drag it out over the long term and finding smaller bites and smaller arcs as opposed to larger arcs. I think that our approach to filming it was probably the same as most documentaries, but our approach to editing it was probably the biggest change.”