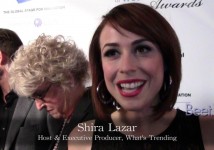 LAS VEGAS — What’s Trending With Shira Lazar has made a name for itself as the live web show dedicated to what’s hot on the web, from YouTube videos to memes and everything in between.  We had the chance to chat with the show’s host and executive producer, Shira Lazar, on the red carpet at the IAWTV Awards at CES to find out what’s on the horizon for What’s Trending in the coming year.

Lazar explains that, "2013 is going to be a huge year of growth.  We’re going to be doing many more deals with more advertisers and hopefully launching more original content outside of just What’s Trending with Shira Lazar."

In the interview, Lazar also talks about what What’s Trending was up to at CES, adding that, "Live events is a really important part of what we do—being where the pulse of culture is, what is trending, and so that’s why we’re here at CES.  That’s why we go to events like SXSW, like ComicCon and many more throughout the year."

Lazar says, "We look at ourselves like what MTV is to music videos, we are to YouTube videos and the culture around it, and as YouTube becomes more of a space for traditional Hollywood and the new digital pioneers, we are that platform that not only curates what’s hot, but the people that are around those big pieces of content."