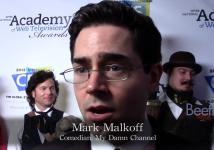 LAS VEGAS — NYC-based comedian Mark Malkoff is known for online videos of his crazy stunts and shenanigans, from living on an AirTran jet for 30 days to living in IKEA for a week, visiting every Starbucks in Manhattan in a day, and more.

At the IAWTV Awards at CES, we heard from Malkoff about his latest project, The Bill Murray Show Starring Mark Malkoff, a series on My Damn Channel in which Malkoff attempts to get Bill Murray to join him for dinner in his Queens apartment.

Malkoff tells us, “I have Bill Murray’s 800-number—he doesn’t have an agent, manager or a publicist, so everyone that wants to work with him has to call an 800-number.” Sofia Coppola had to call the 800 number for five months when she was trying to get in touch with Murray for Lost In Translation. Malkoff has been calling the number for over seven months, since he made his initial call at VidCon in June, but he’s not giving up!

On each episode of The Bill Murray Show Starring Mark Malkoff, Malkoff invites on guests that have met Bill Murray to talk about their Bill Murray experiences and may be able to help Malkoff achieve his goal of having Murray join him for dinner.

In the video interview, Malkoff also tells us a little bit about Celebrity Sleepovers, his IAWTV Award-nominated web series in which he sleeps over at celebrities’ homes.