A “Master Class” at CES: An Insider Tour with Group M’s Irwin Gotlieb 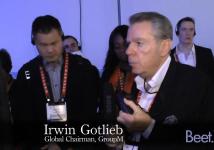 LAS VEGAS — At the Consumer Electronics Show, several ad agencies and media companies host tours of the show floor, but the best one to book a slot on may be with Irwin Gotlieb, chairman of GroupM, the giant media agency of London’s WPP.

He’s been hosting tours of CES for many years for brands and clients, and his tours are like a “master class” in that they showcase what’s most important at the event, says Randall Rothenberg, President and CEO of the Interactive Advertising Bureau, in a post-tour recap with Beet.TV

Gotlieb has an “encylopedic knowledge of electronics,” says Ad Age reporter Michael Learmonth in an article about the tour.

Richard Fain, Chairman and CEO of Royal Caribbean Cruises, says the tour gives insight into the interrelationships between technology and marketing, while Benny Lawrence, Manager of Media & Brand Innovation at Audi of America, likes the chance to hear Gotlieb’s point of view on how marketing and advertising will change in the future.

Louis Jones, CEO of WPP Group’s Maxus, adds that the tour gives a look-ahead into technology. Ed Haslam, Senior VP of Marketing at YuMe, says the goal is to zero in on areas of opportunity and innovation that marketers need to understand.

“He puts the context behind the actual technology, the companies and the ecosystem,” adds Fernando Arriola, VP Media and Integration at ConAgra Foods.