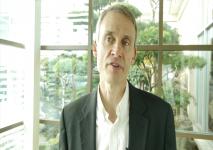 SAN FRANCISCO — Today 41 percent of tablet owners are using their devices in front of the television on a daily basis.  At the Smart TV and Multi-screen Advertising Summit in San Francisco, Colin Dixon, Senior Partner at The Diffusion Group, spoke with us about how the rise of the second screen is leading to a fragmented viewing experience.

"The tablet is a personal media device, and what it’s really telling us is that the audience is fragmenting.  They won’t put up with watching something that they’re not interested in anymore, they’ll just go off and watch something else that they’re interested.  Community viewing is at risk here," says Dixon.  "It’s becoming an audience of Me."

Dixon believes that in the next five years we will see this audience fragment even further.  "We'll be looking at a lot more individual viewing.  The vast majority of the media that people consume will be on an individual basis," and as more viewers turn to the web to watch television content we’ll see a rise in social TV interaction as well.

Additionally, Dixon says, "Five years from today I think we’ll be watching more online than we do over broadcast networks.  That is a huge change and it’s going to happen relatively quickly."