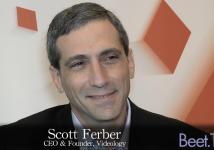 MONACO — Buoyed by its recent acquisitions, digital video ad platform Videology is aiming to make inroads into the addressable TV advertising market next, says Scott Ferber, the company’s CEO and chairman, in an interview with Beet.TV at the Monaco Media Forum.

“We’ve expanded beyond the PC to include mobile devices, phones and tablets, as well as connected TVs, and we’re looking to penetrate the advanced and addressable market in traditional TV,” he tells us in this video interview.

The biggest challenge in reaching into that “fourth screen” addressable market is the issue of data. Unlike on the Web, the cable and satellite operators own the data related to targeted TV ads, Ferber says. “Advanced TV advertising is going to take some time to develop and will require the ecosystem to get comfortable from the operator side licensing the data in some capacity for targeted ads,” he predicts.

Videology began as a demand-side platform and has since broadened, in part to its two recent acquisitions. Last month, Videology acquired LucidMedia, which provides targeting and optimization services for rich media and display campaigns. In the summer, Videology acquired Collider Media to boost its cross-media offerings.

Ferber says the potential for programmatic buying is powerful. The idea of using data to extract audiences in premium content video is appealing to marketers, because that’s how they’ve aimed to reach consumers on TV for years. But on the Web, they can extract those audiences at a “finer level,” he says.

Despite the benefits of audience buying, don’t expect all of advertising to become automated, he says. “We talk to major marketers at the top 1000 companies and they love the efficiency, but they need to get the message out broadly too, so the world will never become totally programmatic,” he adds.