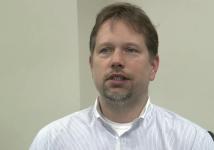 Shazam, the app for smart phones and tablets which "listens" to television shows and immediately surfaces up related information, has been used by major brands in 150 television campaigns, says David Jones, EVP for marketing, in this interview with Beet.TV

Shazam, which indexes some 150 live television channels in the United States, listens to advertisements and can offer a number of actions for viewers, far beyond the 30-second spot which synchs up with Shazam, Jones explains.

Jones says that there are 80 million downloads of the Shazam app in the U.S.