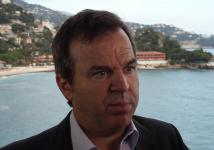 MONACO — Digitas, the big digital advertising agency, launched the Digital NewFronts in 2008 as its own show to bring brands and content creators together in a marketplace for digital media. Last year it morphed into a month-long extravaganza with 15 partners including AOL, Google/YouTube, Hulu, Microsoft and Yahoo.

For the updcoming show, the agency is planning a tightly focused show, with an emphasis on media buyers, explains Colin Kinsella, President of Digitas North America, in this video interview.

Although last year was organized as a collaborative effort by the partners, Digitas had a central organizational role. And, it was the only agency involved with program.

Yesterday, the IAB, the trade association for digital publishers, announced it would take on a key administrative role.

Also in this interview, Kinsella speaks about the evolving opportunities for brands to succeed as content creators. We spoke with him earlier this month at the Monaco Media Forum where he was a speaker.