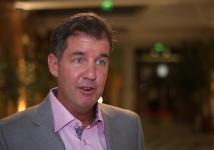 MONACO – Online audience development company AlphaBird is expanding through acquistions, and broadening into more original Web development, says Chase Norlin, CEO of AlphaBird, during an interview with Beet.TV at the Monaco Media Forum.

AlphaBird has grown to 100 employees and also acquired a digital marketing company in Australia last month called Ventures in Digital Media. The acquisition will help AlphaBird expand into the Asia Pacific market with digital advertising and audience data technology. The goal is to be most diversified company in online video, Norlin tells Beet.TV. In addition, AlphaBird is upping its original productions with its recently released Jamie Kennedy Web series "Kennedy's Court," a prank court show. AlphaBird is able to produce an entire season of 25 episodes at a low cost, Norlin says.

"We do original production for clients so we have partners who are using us to develop original programs and then do audience development and monetization, or we're the client and there are a ton of projects like that," he says.

By Daisy Whitney on November 29, 2012 @daisywhitney