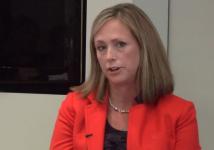 Tracey Scheppach, Executive VP and Innovations Director at VivaKi Starcom MediaVest Group, spoke with Beet.TV contributor Ashley Swartz at the Beet.TV Advertising Leadership Summit in Starcom’s Chicago offices about the targeted TV campaigns as well as the future of interactive TV in second screen apps in this fireside chat.

The campaign was slated to run for four weeks and to target both men and women who are keen to buy designer glasses at lower prices. Starcom also oversaw the rollout of an Allstate campaign for renter’s insurance, marketing the first time the brand has earmarked TV money for this product. The ads are targeted to TV households that aren’t homeowners.

While addressable advertising is making strides, the notion of interactive TV has shifted in part because of Canoe’s failure to scale, Scheppach says.

“We are shifting our mindset to two screen, to something a lot of people have deemed social TV,” she says, adding that the participation layer in those cases will usually occur through a tablet, smartphone or computer rather than the TV set itself.

Scheppach is keeping an eye on Zeebox, which recently launched in the United Kingdom and in the United States with Comcast, as a potential leader in the two-screen business. Zeebox’s tools integrate social media, commerce, as well as popular sites such as Wikipedia and IMDB, she explains.