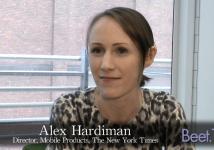 The New York Times has launched a Web app for digital and print subscribers as a part of the publisher’s NY Times Everywhere initiative, says Alex Hardiman, Director of Mobile Products for The New York Times in this interview with Beet.TV

Unlike the Financial Times, which scrapped the Apple iOS native app, the Times will continue to invest and grow its native apps, Hardiman says.

In the interview, she speaks about the organization of the new app which was developed in-house. While having unique design elements, it has some limitations versus the native app including the ability to cache photos and other data.