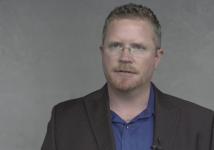 As more consumers use a "second screen" video device (tablet/mobile/notebook) to supplement their television viewing, content creators will have an opportunity to make content specifically for a "second screen," says Eric Anderson, head of content and product solutions for Samsung North America, in this interview.

in a significant commitment to fostering this new area of creativity, Samsung sponsored a competition for video producers to create multi-screen programming.  The winners were announced on Friday night at the New York Televison Festival.  The recipients were awarded a $300,000 production grant from Samsung.

In the interview, Anderson explains the creative opportunities around this emerging media platform.

At the Festival, we interviewed Anderson and two content creators who describe their programming for two screens. We will publish those interviews later this week.

Winner of the Samsung Second Screen Storytellers Competition was
“D-TEC”, created by Joseph Saroufim, Peter Saroufim, and Stephen
Interrante.  We have embedded the video below.  It shows the main action and superimposes screen shots of the images created for the second screen.

The Samsung award was one of 19 development deals announced at the Festival.