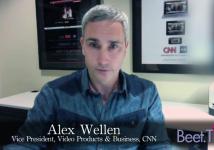 ATLANTA (via Skype Video) Beginnig with the first presidential debate, CNN.com has provided the tools to viewers to "DVR" footage, and share video clips of their making, to Facebook and Twitter.

This effort has increased viewing of the event both live and on-demand in sort of "recirculation" scenario explains Alex Wellen, VP for Video Products & Business, CNN, in this Skype Video interview from CNN Center in Atlanta.

This blending of live, on-demand and social, debuted during the debates, maybe the "future of TV," says Wellen.

To implement the clip and share solution, CNN turned to San Francisco-based start-up SnappyTV, he explains in this video interview.  The DVR capability was created by Turner and CNN.

Viewers of tonight's vice presidential debate between Vice President Joe Biden and Representative Paul Ryan will be able to use the sharing tools.