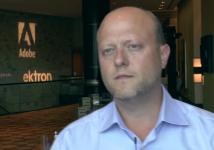 Earlier this year, Brightcove released developer tools to create a "dual-screen" app to allow viewers to control the big and small from the iPad.  The first implementation is with Discovery Networks International, which is debuting the service in Italy, the companies announced today.

In June, we spoke with Brightcove CEO and co-founder Jeremy Allaire about the new dual-app product.  We are republishing the video today.

More on today's news on TechCrunch which first reported the news.