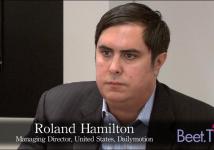 CHICAGO – Dailymotion, the world's second biggest video site, is expanding its live music programming with the streaming of Virgin Mobile's FreeFest, says Roland Hamilton, U.S. head of the Paris-based company, in this interview with Beet.TV

Also in this interview, Hamilton speaks about developments with consumption via the Microsoft Xbox, Samsung televisions and the emergence of a "four-screen" content and advertising distribution strategy.

Hamilton was a speaker at the the Beet.TV Video Advertising Leadership event in Chicago earlier this week.