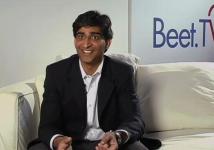 LONDON — The Android platform will likely be the dominant viewing platform for mobile video in the future, Sean Knapp, Co-Founder and Chief Technology Officer at online video technology firm Ooyala, says during the recent Beet.TV Global Video Summit at the BBC Worldwide. That's important for developers and programmers to keep in mind, especially given the heavy focus on Apple's iPhone amongearly adopters.

Today, less than 10% of the video consumption Ooyala tracks is occuring on Android devices compared to Apple devices, but that's starting to change, Knapp says. Already in Japan, the share between the two platforms is starting to flip in Android's favor. "Over time, [Android] will be 80% to 90% of the market. That's where the market is going," he says in this video clip.

In the U.S. smartphone market, Android commands about 52% of smartphones, with Apple snagging 34%.

For more insight on the smartphone shifts, as well as innovative app strategies, check out this video clip. Knapp was a panelist at last month’s Beet.TV Global Video Summit at the BBC Worldwide.