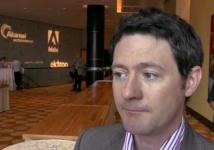 BOSTON — Manchester City Football Club will grow its mobile and social video content, as part of the club's longterm digital strategy, says its Digital Head, Russell Stopford in this video interview with Beet.TV

The football club is one of the UK's first premier league teams to launch its own YouTube channel, Stopford says and with over 45,000 subscribers, its video content now has over 32 million video views.

Despite concerns that the channel would sabotage the site's video viewership, he explains that it has only amplified traction to the site.

We spoke with Stopford at the Brightcove global customer conference, on the club's future digital strategy and type of video content that is gaining traction — including footage of England's goalie, Joe Hart's overhead kicks during training that attracted over a million views.