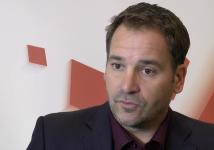 The Boston Globe will create more long tale content for the publisher’s channels and YouTube, in hopes of driving more traffic says, its VP for Digital Products, Jeff Moriarty.

MSNBC.com’s Executive Producer, Stokes Young says the company is already using metadata to make broadcasts transcripts from shows such as NBC Nightly News searchable. It has proved successful for the business side of things, he adds.

Moriarty and Young were joined by Reuters’ Head Of Global Programming, Dan Colarusso, The Wall Street Journal’s Director of Video, Rahul Chopra and Taboola’s SVP for Publisher Sales and Operations, Ira Silberstein, at MSNBC.com’s New York offices, to discuss the future of online video in news.