WSJ Social Media Editor: Structured Use Of Twitter Puts Him One Step Ahead 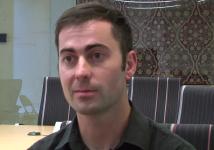 Social media guru, Neal Mann says, using new technology alongside Twitter is an excellent way of verifying tip-offs from followers, in this video interview with Beet.TV

Speaking of Twitter as a good source for journalists, he describes Google Earth and Street View, as crucial additional tools that help put social media sources through rigorous journalistic standards.

Known as @fieldproducer to his 47k plus followers, Mann has been a prolific tweeter since 2009.

He joined The Wall Street Journal (WSJ) as Social Media Editor in April, after leaving Sky News. Covering foreign news as well increasing audience engagement with WSJ’s video and social media efforts, will be part of his new role at the paper.

We spoke with him at the WSJ offices on how he has built his following and the functional differences between Facebook and Twitter.