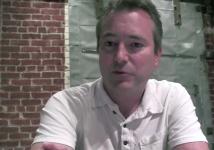 Global entertainment website, IGN, is broadcasting live coverage of the Electronic Entertainment Expo (E3) 2012 on the Xbox LIVE for the first time says Peer Schneider, Publisher and SVP for Content, in this interview with Beet.TV

The console has previously been a platform for consuming various enterainment media such as sports broadcasts and Netflix, but never game-centric content, he says.

Video game enthusiasts can also watch the latest from the expo, including real-time demos, interviews with developers and press conferences on the desktop, YouTube and mobile devices.

The non-stop coverage will begin today with the Microsoft and Sony press conferences and end on June 7.

This interview was done via Skype video.

More on the ascendance of Xbox LIVE in this report by Ryan Lawler of TechCrunch.