“The Third Wave” of The Video Revolution: “It is Acceptable to Pay for Content” 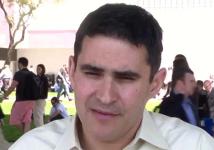 LAS VEGAS – Thanks in part to the wide-spread use of paid services for video on demand including Amazon, Netflix and Hulu, it is now "acceptable to pay for content," says Brightcove's Eric Elia in this interview from the NAB Show.

Elia, VP, TV Solutions, is a member of the founding team of Brightcove.  He gives an overview on evolution of online video and its dramatic transformation over the past 12 months withs with proliferation of tablets, connected TV's and the emergence of paid scenarios.  He says we are in the "third wave."

At the show, Brightcove announced a new payment service for its clients.  Elia sees considerable opportunities for the paid scenario for entertainment programming, quality instructive video and for "Netflix-like" subscription services in various markets

He also addresses developments around digital rights management and explains the new arrangement with Google's Widevine unit to provide protection to Brightcove customers.

More on his "Third Wave" thesis in a post up on TechCrunch.